Writing an organ donation essay or giving an organ donation persuasive speech is critical for making personal life choices and making a change in the world. There are different ways to narrow the topic and choose one clear focus for your essay. However, no matter what focus you choose, you will have to inform yourself on key aspects shaping the narrative around organ donation:

Below, you will find this core information. Thus, choose the narrowed topic, read the main facts and debates around the topic, and have some of the quality sources ready before you even start further research.

Organ donation essay topics are on verge of medicine and ethics and may take the form of a range of discursive questions:

1. What is the best way to decrease the shortage of organs for transplantation?

2. Should the legislature concerning organ transplantation be changed?

3. Should there be an opt-in or opt-out donor system?

4. Should people be refused organ transplantation for leading an unhealthy lifestyle?

6. Should doctors be required to report the cases of organ trafficking (when a person has a needed organ though he did not get it being on the national list)?

7. Should inmates be listed on the national waiting list?

Sources for an Organ Transplantation Essay

The following sources provide the information you need to write your essay. For your convenience, I have added APA and MLA citations so that you don’t have to spend additional time formatting your paper.

The 2004 Report of the Centre of Bioethics is a great source to start with as it provides a great overview of the legislature, allocation principles, and possible solutions accompanied with the alternative or opposing views.

Here are the most important facts and ideas you can find in this text:

Opposing views on the distribution criteria:

Five strategies to increase the availability of organs:

2. Mandated choice (all the people are made to make a choice: donate or not to donate organs after death). The issue with this strategy is that people fear lest the death may be declared earlier or not so much affords will be put into saving the patients if his donation wish is known. Therefore, when the policy was tested in Texas in 1990’s, 80% chose not to donate.

3. Presumed consent (opt-out system – all are donors unless they specifically request not to donate). Opponent say that the needed level of public education and understanding of their rights will be difficult to achieve and some people who oppose to donation may find it difficult to indicate their wish.

4. Prisoners (taking organs of prisoners who are put to death).

5. Incentives (both financial and not-financial incentives such as covering funeral expenses or donating in the name of the deceased are discussed). Buying and selling of organs is banned as the means of exploitation of the poor who are likely to overlook the possible drawbacks of donation for monetary incentives.

The source considers incentives as a possible solution to the organ shortage. The greatest amount of debate for financial incentives surrounds kidney donation as

Introducing the payment for organs is opposed as the way of exploitation of the poor. The opponents suggest once the market is created, it will be impossible to regulate. Nevertheless, if there is a regulated organ market

In addition, the interviewed expert stresses that wealthy countries with a high demand for organs should assume responsibility for the flourishing of the trafficking business. Therefore, reducing organ shortage in the U.S. will also reduce the organ trafficking market in developing countries, where the poor may not rely on adequate social and legal protection.

Should We Legalize the Market for Human Organs?

The source presents the excerpts from the speeches of the experts, made on the public debate on the issue. Here are the most persuasive:

Sally Satel, a psychiatrist and resident scholar at the American Enterprise Institute who received a kidney from a friend in 2006,

“We are not talking about a classic commercial free-for-all, or a free market, or an eBay system. We’re talking about a third-party payer. For example, today you could decide to give a kidney. You’d be called a Good Samaritan donor. … The only difference in a model that I’m thinking about is where you go and give your organ, and your retirement account is wired $40,000, end of story.”

“I agree with our opponents that the black market must be closed. I disagree with asking patients to accept death gracefully, instead of resorting to the black market. My position is that development of a legal, regulated mechanism for donor compensation is the only means of effectively eliminating the demand for this covert activity, closing down the black market and improving safety for donors and recipients. … Compensation for the organ donor’s time and risks, by providing life insurance, lifelong health insurance and even a direct monetary fee, is more appropriate than for the donation of an egg, the rental of a uterus for a surrogate pregnancy, or the participation in clinical experimentation, all of which are legal.”

Francis Delmonico, professor of surgery at Harvard Medical School and adviser to the World Health Organization on transplantation,

“What we do here has a profound influence on the rest of the world. Now, I say that because I’ve been to Manila. And … it’s not a matter of balanced thought when a 14-year-old has to sell a kidney to an American that comes there … About 20 patients a month go from Israel to Manila because of cheap prices. If there’s a market legalized in the United States, in the global context of medical tourism, do you think that the 72-year-old patient on the list would wait for a kidney here, versus going to buy a 20-year-old kidney in Manila?”

David Rothman, professor of social medicine at Columbia University and director of the Center on Medicine as a Profession,

“What this is really about is the sale of organs from living donors. … There are very, very good reasons – many drawn from behavioral economics, some drawn from past experience — that suggest that, in fact, to create a market might diminish the supply, not increase it. In the first instance, if I can buy it why should I give it?… In England, where the sale of blood was not allowed, rates of donation were considerably higher than the U.S., where the sale of blood was allowed.”

Knox, R. (2008). Should we legalize the market for human organs? NPR. Retrieved from  web address.

The author argues for the legalization of organ trade and opt-out system. The source explains the need in kidneys as “biological life insurance” but stresses the desperation of people who spend years on dialysis and long to obtain the organ by any means. The author also testifies the ability of the poor to give informed consent. The source also reviews the disincentives: people willing to donate to friends refuse to do that because then they will be denied life insurance.

“Organ Trafficking: A Deadly Trade” by Julie Bindel tells several stories of organ trafficking schemes and presents important statistics. In particular, according to a recent World Health Organization (WHO) research, there are 10,000 black-market operations involving purchased human organs annually and 5-10% of all kidney transplants are obtained through organ trafficking. The article shows donors can be kidnapped and forced to give up an organ. Doctors can deceptively convince them they need an operation and remove an organ without the knowledge of the patient. Some victims can be murdered to order. Among the targeted, there are many children, especially from poor backgrounds or disabled. In many cases, donors give consent to sell their organs, but eventually get neither money nor proper after operational treatment.

“Trafficking in Human Bodies” is an extensive official report conducted at the request of the European Parliament. It gives very detailed information on the forms and routes of organ trafficking. In addition, it clearly appeals to the responsibility of the wealthy states who drive the organ business in the third world developing courtiers. Furthermore, it discusses the current legislation concerning the prevention of organ trade (rather lack of its effectiveness). In particular, it considers the role of doctors and stresses the necessity to change legislature to place more responsibility on those who actually conduct illegal transplant operations or consult patients on obtaining organs illegally.

“Human Harvest: China’s Organ Trafficking” by Leon Lee tells about the study performed by Nobel Peace Prize nominees, David Matas and David Kilgour, who have spent years investigating organ harvesting in China. In the documentary, which summarized their work, the researchers show that the organs, excessively transplanted in China, usually come from political prisoners. Namely, the members of the Falun Gong movement, banned by the Chinese Government, are killed to order for transplant tourists.

“Offender Organ Transplants: Law, Ethics, Economics, and Health Policy”. The article considers the relevant law and ethical issues and argues for the provision of all the necessary medical care to prisoners, transplantation operations in particular, as a necessary attribute of a democratic state and an essential component of correction. At the same time, it acknowledges the fact that the prison population has an increased need for transplants due to health history and ethnic and racial make-up.

“Donating Organs to Inmates Targeted”. The article discusses the bill suggested by Denham, which meant to allow people to opt-out of letting the organs they donate go to prisoners. The bill followed the heated discussion of the allocation of a heart (the most expensive transplant organ) to the prisoner who still died a year after the operation for being “not a model patient”.

Look through other topics on Health and Health Care, State Policies, or Ethics.

Use quality proofreading and editing services to make the most of your speech or essay. 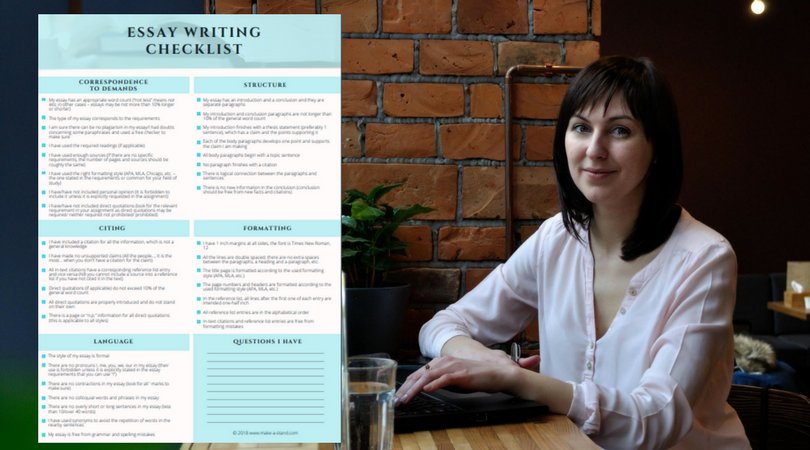 Please check your inbox – the Checklist must be waiting for you there! If it did not get into that scary Spam folder…

Share This Story, Choose Your Platform!
About the Author: Nataly

Hi, I am Nataly and love engaging, fit for purpose, and edited to perfection writing. Feel free to reach out to work with me, suggest topic ideas, or give feedback on Make a Stand - the project I passionately grow for more than 3 years now.
Related Posts

50 College-Level Compare and Contrast Topics for an Essay

20 Advantages and Disadvantages of the Internet for an Internet Essay

Get Better at Writing Essays with These 10 Tips from Professors

Challenging Topics for Abortion Essay With Tips and Sources

50 College-Level Compare and Contrast Topics for an Essay October 17th, 2021

20 Advantages and Disadvantages of the Internet for an Internet Essay June 27th, 2021

Get Better at Writing Essays with These 10 Tips from Professors March 6th, 2021

Easy Guide to Writing a Critical Reflection Paper on an Article or a Book February 28th, 2021